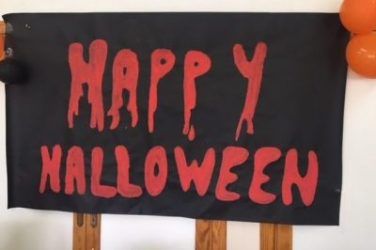 You are probably not going to believe me, I am not even sure about what happened that sinister October night years ago. Yes, it fulfilled the stereotype, a problem had happened with the lampposts so an intense darkness reigned the street, in which of course the cold was abnormal. I can remember it as if it were yesterday but at the same time I have forgotten many things in consequence… However, I need to tell the story, my own Halloween story.
I was returning home from work, it was my first night shift so I felt more tired than ever, also I started to feel dizzy and confused. I tried to use my phone as a flashlight, although, when I unlocked it there was only a strange sequence of numbers and colours and subsequently it turned off, totally useless. Annoyed, I looked ahead expecting to see the desolate street, but I realized it was not there anymore. Somehow, I found myself in a sort of a field I had never seen before. Just imagine how overwhelming it was being lost, confused and without a way of communicating with anyone. I saw a cottage far away, it seemed inhabited but the closer I got, the more empty and haunted it looked like. Regretting my decision, I almost decided to turn back, but I did not have a better option. I got to the porch and I saw a big knife so, afraid, I stepped back and I stumbled on something: it was a camera, The Camera. I took it in my hands and it began to play pieces of mixed recordings by itself, the sounds were disturbing and the images sounded familiar to me: a field, a person I recognized as myself and odd colours and numbers like those on my phone. Fear was paralyzing me, and to improve the situation, I felt someone’s hand on my shoulder. It was an old woman who was telling me something I could not understand, I was planning how and where I could run away when I noticed I was on the street again, I heard a scream, which should be mine, don’t you think? Nevertheless, it was the woman looking at my hands so I did it too. What I saw was horrible, they were full of blood and the camera was still there, playing the same video.
I know I have not mentioned it before… but what I was doing on the record was killing an entire family, the family who lived in the cottage, with a big knife. I tried to explain to the police that it would have been impossible for me to go to that field and come back in the same night but apparently, everyone said the last time they had seen me was the day before, even my boss told I had missed my night shift at work when I perfectly remember I had not. I am writing this with a pen I have found in the asylum where I have been for five years because I wanted all of you to know that I am not guilty of those awful murders, it cannot be possible, can it?